Not only that the then two leaders of Turkey and Greece had spoken about the Macedonians, the Greek Prime Minister Eleftherios Venizelos said he wanted to grant the Macedonians "schools and minority rights"!

The Macedonian-Australian journalist Sasa Uzunov discovered a spectacular document in the National Archives of Australia. Quite a few secret reports from the British Foreign Office at the time are kept there; these have now been declassified and made available to the public.

Such a secret report of September 30, 1933 shows that the Greek Prime Minister Venizelos knew exactly who the Macedonians were - neither Serbs nor Bulgarians. Even more, Venizelos gave an approximate number of ethnic Macedonians in Northern Greece who were then still living in Northern Greece. The number he estimated was "around 60,000". One should note, however, that the number seems small at first glance, but is due to the population exchange from 1923.

The kingdom of Greece had occupied Aegean Macedonia, or South Macedonia, in autumn 1912 and received it from the great powers in August 1913 at the so-called Bucharest peace. Since then, the ethnic Macedonians in northern Greece have faced reprisals, up to and including displacement. One should bear this in mind when considering the number mentioned by Venizelos as "small".

Venizelos with claims to the Serbian King Alexander I. Karađorđević

In a conversation Venizelos also demanded that the then Serbian King Alexander I Karađorđević from the ("first") Kingdom of Yugoslavia demanded the recognition of the minority in "West Serbia". Or "to please" the Macedonians.

Some notes and comments on the main figures:

Ataturk is named in the report with the honorary title Gazi, which he received from the Turkish National Assembly in September 1921 when he was appointed Marshal.

Eleftherios Venizelos was a politician and Prime Minister in Greece. He is considered to be the greatest politician in Greece in modern times. Under his aegis, Crete was united with Greece in 1913. As Prime Minister of Greece, he extended the borders of the young state to the extent it is today in the Balkan Wars and during the First World War. In his honor, statues of him have been erected all over Greece, streets named after him. Athens airport bears his name.

Alexander I. Karađorđević (or Alexander I of Yugoslavia) from the House of Karađorđević, was the Prince Regent of Serbia from 1914 to 1918 and the King of Yugoslavia from 1921 to 1934. In 1929 he suspended the constitution and proclaimed the royal dictatorship. He was assassinated on 9 October 1934 in Marseille, France.

4. M. Venizelos said that he had, at the request of the Gazi (Ataturk), prolonged his stay here in the hope of seeing King Alexander (of Yugoslavia) as His Majesty cam through, but the King is now not expected to arrive here until Tuesday or Wednesday next, and he himself has to leave for Athens on Monday. He had, however, little doubt that the Gazi and Ismet Pasha would hold to the King much the same language that he himself had always used, namely, that the Yugoslav Government  should make a serious effort to content the Slav-Macedonian minority in western Serbia. M. Venizelos maintained that these people, of which Greece has a small share, not more than 60.000, are not pure Bulgarian, but something between Bulgarian and Serbian, and he had, he said, always been ready to give them Slav-Macedonian schools, and other reasonable "minority" privileges. He felt that if the Yugoslav Government could be persuaded to pursue  liberal policy in this sense, "Macedonia irredenta" would soon cease to be of use to Bulgaria as a political "slogan", the "komitaji" would lose mob-sympathy which at present makes it impossible to drive the poison out of the Bulgarian body-politic, and the Bulgarian Government would not only find itself free to work for the real improvement of its economic and political relations with its neighbours, but would find those neighbours more than ready to meet it half-way. 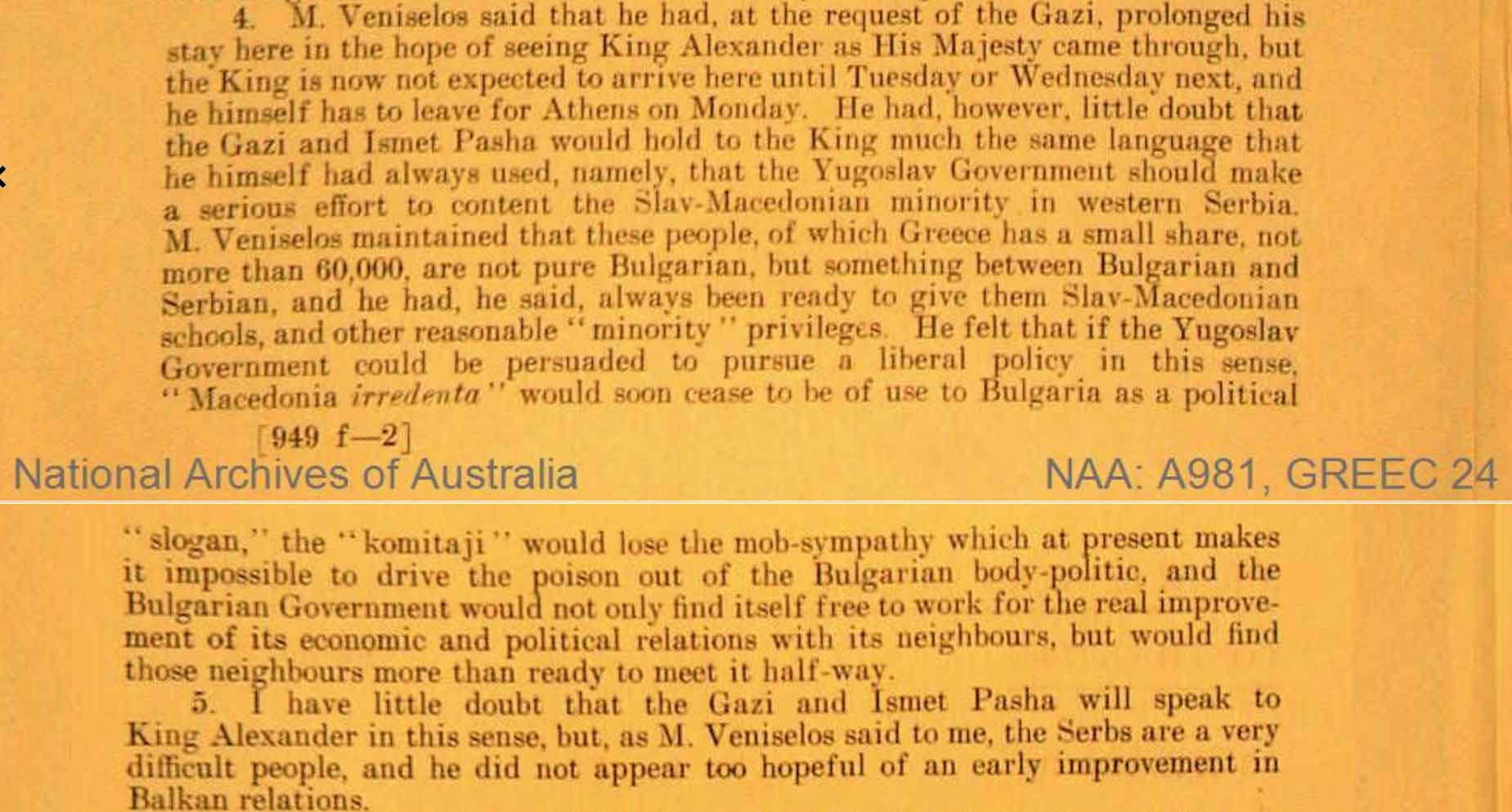 5. I have little doubt that the Gazi and Ismet Pasha will speak to King Alexander in this sense, but, as M. Venizelos said to me, the Serbs are a very difficult people, and he did not appear too hopeful of an early improvement in Balkan relations.