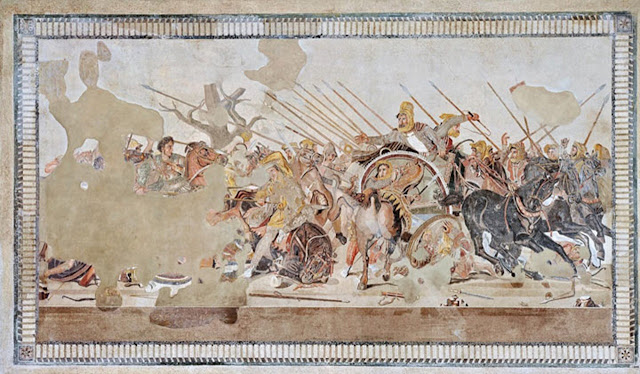 The tumultuous chain of events that unfolded after the death of Alexander the Great was the original Game of Thrones, with more riches, bloody intrigue, and larger-than-life characters than George Martin or the HBO series could have invented. A vigorous young king, by sheer force of personality and some very shrewd politicking, managed to take his army from Macedonia through Asia Minor, across the Near East, through the Khyber Pass, and to the Hindu Kush with great dreams of unifying a vast empire.

After succumbing to a 10-day fever (perhaps brought on by malaria or by less "natural" causes), Alexander the Great died unexpectedly in Babylon in June 323 B.C., leaving a freshly conquered empire of unprecedented breadth and complexity but no designated heir. To understand the bloody struggle that ensued, one must look west to the origins of Alexander and his successors, the kingdom of Macedonia, where just north of Greece a small, restless hereditary monarchy had been growing in stability, territory, and power under the reign of King Philip II, Alexander's father. Philip consolidated control over his notoriously turbulent lords and enlarged his kingdom by arranging a series of marriages with princesses from surrounding territories for himself and further subduing hostile neighbors through sheer military might.

Macedonian kingship was predicated on the acclamation of the army, a factor that shaped the policies of Philip, Alexander, and those who came after them. Along with a crack cavalry, Philip developed a unit of infantrymen armed with long pikes (sarissas) that were easily able to repel forces armed with much shorter spears and heavier shields. He swept south through Greece in a series of stunning military victories, inflaming Athenian orators (most notably the long-suffering Demosthenes), and prepared to venture east, to challenge the Persian Empire.

Alexander was Philip's son by his fifth wife, Olympias—a Molossian princess who traced her noble lineage back to Achilles and had great ambitions for her precocious son. Alexander was just 20 when his father was assassinated in 336 B.C., an incident likely masterminded by Olympias who saw her son's inheritance threatened by Philip's recent marriage to a young Macedonian noblewoman and their newborn son. Dynastic politics were always dicey, as Macedonian kings were typically polygamous. Not one to take chances, Olympias had the young woman and infant murdered swiftly. This quick and dirty approach to eliminating threats to royal succession was typical of Macedonian royalty and remained so in the generations after Alexander's death. Olympias was a particularly ruthless practitioner. 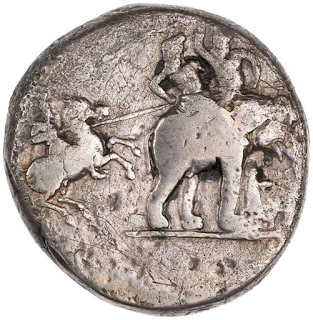 Adored by his army and with no further impediments to his succession, Alexander was declared king and set about realizing and enlarging his father's ambitions by crossing the Hellespont, famously engaging the Persian king Darius III at Issus and Gaugamela, securing Babylon and Susa and the immense treasure there, and reaching northern India. It was here that the army first saw war elephants in what must have been a terrifying encounter that, along with the punishing monsoon season, likely prompted their refusal to continue further into the subcontinent and beyond.

Although Alexander was a brilliant tactician, his success was due in large part to his charisma and immense self-confidence, which bordered on megalomania. He had himself proclaimed as the son of Zeus in the Egyptian desert and might have come to believe it. As important was his astute handling of the populations he conquered: absorbing their militaries, maintaining existing satrapies (local governing bodies), and organizing marriages for himself and his soldiers with local noblewomen (most famously at a mass-marriage ceremony at Susa). His foreign queen, the Bactrian princess Roxanne, was pregnant when Alexander succumbed to the mysterious fever in 323 B.C.

As he lay on his deathbed, his generals—stalwarts who had campaigned with him for over a decade—debated their next steps. Alexander left no designated heir, and in his dying breaths reputedly granted his kingdom "to the strongest." His body was embalmed, and an ornate golden hearse was constructed to transport it back to Macedonia for burial.

The stakes, compounded by confusion, were high. Distrust among his generals made it impossible to reach consensus, and discussions were moved to the throne room, where the king's regalia and crown were placed on his throne. Even after death, he presided over the ensuing power struggle and acted as a "ghost on the throne."

Alexander had given Perdiccas, his top-ranking officer, his signet ring, and with it, evidently, the wherewithal to organize the situation to his advantage. Perdiccas was quick to promote Alexander's feeble-minded half brother Arrhidaeus (later rebranded Philip Arrhidaeus) as the rightful heir to the throne until Roxanne's child came of age. The precise nature of Arrhidaeus' mental handicap remains unclear, but it allowed Perdiccas to rule as regent. Perdiccas entrenched himself in Babylon with his puppet king, while the rest of the empire was carved up with regions assigned to other generals, most notably Ptolemy in Egypt, Antigonos "The One Eyed" in Cilicia, and Eumenes in Cappadocia. Far to the west, the formerly independent Greek city-states seethed and attempted (unsuccessfully) to gain back autonomy from an aged Antipater, the Macedonian nobleman who served as regent in the royal capital of Pella.

The most expedient way for this first generation of Alexander's successors to legitimize their reigns and secure the loyalty of their soldiers was to lay claim to Alexander's legacy through his bloodline. One strategy was alliance through marriage. In this most uncertain climate, two formidable royal women—Olympias and Cynnane—understood that the power struggle unfolding in the East presented an opportunity for them to regain power and ensure their survival in uncertain times. Without powerful allies, these royals ran serious risk of being murdered. With daughters of childbearing age who were both blood relatives of Alexander, the women set their sights on the most powerful bachelors in the realm and set about matchmaking. Olympias dispatched her daughter Cleopatra east, sending overtures for a royal match to Perdiccas in Babylon. Cleopatra set up residence in Sardis and waited. She would wait two decades—the rest of her youth—as a princess in a tower. 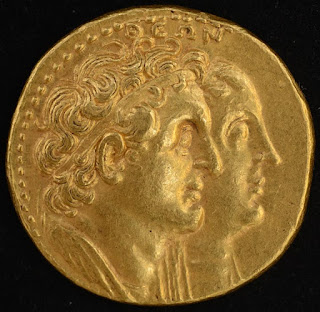 Armed to the teeth, Cynnane (the daughter of an Illyrian princess and known to have fought alongside Philip's army) traveled with her teenage daughter, Princess Adea (Alexander's cousin), and a mercenary army across the Hellespont and into Asia with the objective of reaching Babylon and marrying Adea to Philip Arrhidaeus. Seeing this potential alliance as a direct threat to his own power, Perdiccas dispatched his brother and troops to halt the wedding expedition. Cynnane was killed in cold blood by a man she grew up with in the royal court—an outrageous crime decried by the horrified soldiers who witnessed it. To mollify them, Perdiccas arranged for the marriage to take place in Babylon.

Several years later this royal couple made their way back to the Macedonian capital, luring Olympias back from Epirus to promote the claim of her young grandson Alexander IV, Alexander's son with Roxanne. Adea turned out to be an ambitious and formidable opponent, and Olympias smelled trouble. The two women met on the battlefield. Olympias led her forces to the beat of drums, dressed as a maenad with ivy crown and fawn-skin cloak. Adea led her own army, dressed in the full armor of a Macedonian infantryman. Olympias' appearance and reputation so cowed Adea's troops, most abandoned her and joined the dowager queen, who in short order captured Adea and Arrhidaeus and ostentatiously imprisoned them in Pella. No longer able to discreetly kill them (the Macedonian norm), she hired a band of Thracian women to stab Arrhidaeus to death and awarded Adea the option of suicide, sending a sword, a noose, and a dagger to her prison cell. Ever defiant, the young queen hung herself with her own scarf. Olympias hid their bodies and denied them proper burial.

Her reign of terror in Macedonia continued as she went after the family of Antipater, who she believed poisoned Alexander, opening graves and scattering the ashes of deceased relatives and quickly eliminating living ones. But Olympias would have her comeuppance. She had gone too far in her flamboyant revenge, and Cassander (Antipater's only living son) returned to Macedonia and rapidly had Olympias killed, meting out a final revenge by casting her corpse outside the city to be ravaged by beasts. Cassander had Alexander IV, the boy who would be king, and his mother quietly killed several years later and buried them in Vergina, in a manner befitting royalty.

Ptolemy, who had quietly relocated to rule Egypt, had a different tactic for linking himself to Alexander: he stole his body. In a brilliant and bold move, his forces hijacked the funeral train and luxurious hearse containing Alexander's mummy as it made its way from Babylon to Macedonia, bringing it first to Memphis and then to his new Egyptian capital, Alexandria. There, Alexander's mummified corpse was displayed in an elaborate mausoleum.

In a famous encounter several centuries later, the Roman emperor Augustus visited the mausoleum to pay homage to the legendary Alexander. Bending down to kiss the corpse, he inadvertently knocked off the mummy's nose to the dismay of onlookers. It was Augustus' arrival in Egypt, after his decisive naval victory over the forces of Kleopatra VII's and Marc Antony in 31 B.C., that marked the decisive end of the Wars of Alexander's Successors. The bloody game of thrones that characterized the Hellenistic world for nearly three centuries was over.
Tags
Ancients Article Demosthenes Persia Story