In August 1903 the Macedonians rose against Ottoman rule. The Turks brutally suppressed the uprising, after which there were countless attacks on the population. By regular Ottoman troops, but also by irregular formations consisting of Albanians in the service of the Ottomans.

The Sydney Mail and New South Wales Advertiser reported on Wednesday, September 23, 1903, about "terrible excesses by Turkish troops, particularly the Albanians, in the vilayets of Bitola and Adrianople".

The Ottomans named an administrative district as a vilayet, which they in turn introduced as an occupier.

The Rebellion in Macedonia.

Austria and Russia have protested to Turkey against the horrible' excesses of Turkish troops, especially of Albanians, in the vilayets of Monastir and Adrianople. Some Albanians have been recalled, and sent to their homes. A general insurrection has been proclaimed in that portion of the vilayet of Salonika eastwards of the River Vardajr.

The district has been subdivided into eight sections, a Bulgarian officer commanding each. Colonel Zontcheff is Commander-in-Chief of this body of insurgents.

Owing to the scarcity of officers the Sultan has promoted all sergeant-majors to be lieuteuants.

Diplomatists agree that indiscriminate condemnation of Turkey is unjustifiable. Both sides are guilty of atrocities.

The ' Standard ' says that a few British and French ships are keeping in touch with Salonika in the event of the Powers acting in concert.

Russia and Austria have returned unfavourable replies to the Bulgarian Note asking for the interference of the Powers.

The regicides completely rule King Peter of Servia, whose chief Minister threatens to reveal an incriminating letter whenever the King is refractory. 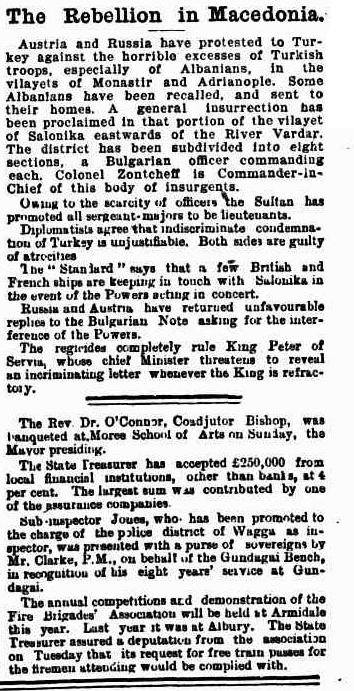