It was not until the 1970s that serious work on Phrygian inscriptions began. With the exception of American excavations at Gordium in the 1950s and a publication in 1966 of an adventurous work by Otto Haas (Phrygische Sprachdenkmäler), there had been little progress until the decade of the 70s.

It was the advent on the scene of a giant that broke the lull. Aided by the Asia-Minor-inscription terrain expert, Claude Brixhe, it was Michel Lejeune who brought his genius and expertise to bear on the subject matter.

Having organized the cooperation of the French Institute of Archeology at Istanbul, the University of Pennsylvania excavation team at Gordium, and a variety of museums in Turkey, they systematically proceeded to prepare, examine, and review each inscription individually. By joint accord they established a definitive redaction which in 1984 was published in Paris as Corpus des Inscriptions Paléo-Phrygiennes.

My interest in the Old Phrygian inscriptions was aroused two years ago when I was searching for Anatolian toponymic traces left behind by the tribe of Volcae Tectosages. I was intrigued by the seemingly Slavic toponymy encountered over a much wider area of the plateau than that settled by the Tectosages. I pursued the matter to the point of tracking it down to the work on the Old Phrygian inscriptions by Lejeune and Brixhe. A cursory perusal, however, persuaded me that any possible division and translation of the inscriptions would prove to be a daunting task. Since I was in the process of putting the final touches on Journey Back to the Garumna, I was quickly induced to postponing any work on the Old Phrygian passages to a less pressing time.

And so it remained for a year. Then, I received a letter from Mr. Anton Skerbinc of Boswell, British Columbia, who in 1999 had translated portions of Adieu to Brittany into Slovene. At the behest of Professor Aleksandar Donski of Shtip, Macedonia, who had sent him an artistic rendering of the front segment of Old Phrygian inscriptions M-01a, M-01b, M-02, and all of G-105, Mr. Anton Skerbinc asked me to look into the possible Venetic connection to the inscriptions. Since I had previously translated the inscription from Plumergat in Brittany, now attached as Appendix E, for him and Giancarlo Tomezzoli of Munich, Germany, I heeded his intuition. 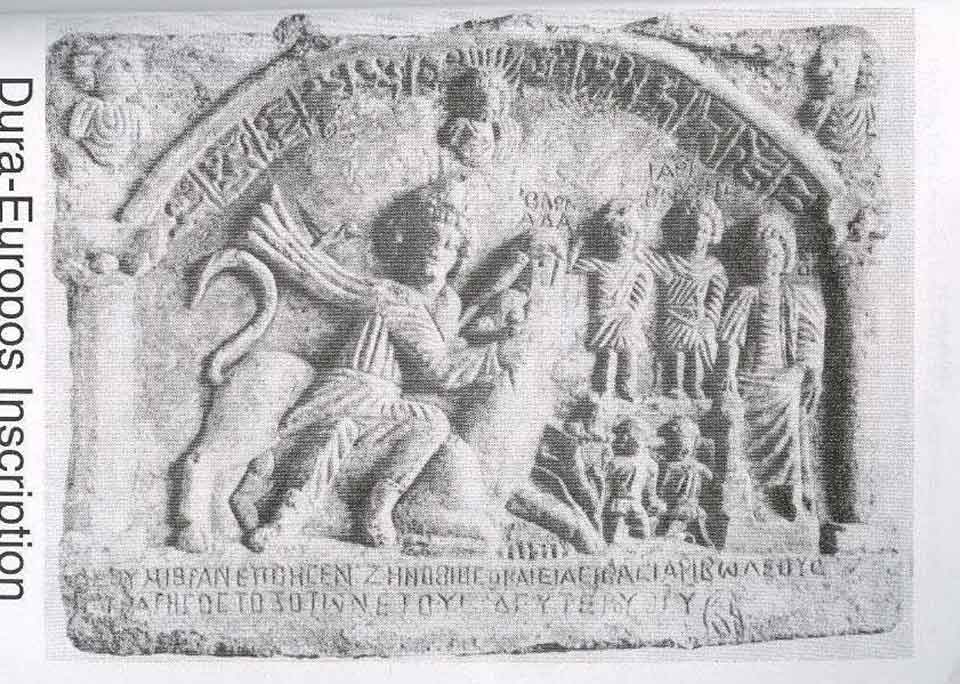 The letter was a timely prod for me to get on with the Old Phrygian passages in earnest. The fact that six inscriptions from Dura-Europos had also been Venetic was a fair intimation of possible success. It was, in fact, the Venetic passages from Dura-Europos that caused me to devote much of my spare time to the endeavor of locating other Venetic colonies from the era of the post-Alexander Seleucid Empire. Ever since Adieu to Brittany had come out, Dr. Charles Bryant-Abraham of San Diego, California (to whose work in the area, incidentally, I had also been introduced by Mr. Anton Skerbinc), and I have been trying to find non-Greek, pre-Hellenic-Age inscriptions from Macedonia. So far, unfortunately, in vain. However, the division and successful translation of the Old Phrygian inscriptions in this book go a long way in alleviating our frustration on that front.

Dr. Charles Bryant-Abraham´s statement in Appendix D that the "Venetic inscriptions from Dura-Europos lend weighty if still circumstantial evidence that Alexander and his Macedonian people may very well have been Veneti" is now being upheld by the compelling lapidary testimony from the Anatolian plateau.

In respect to the linguistic provenance of the inscriptions, the guarded none committal expressed by the Encyclopedia Britannica should be noted in vol. 4th page 437, it states "Gaulish is attested by inscriptions from France and Northern Italy. Modern knowledge of the vocabulary and sounds of Gaulish is slight, and its exact relation to the Celtic language of Britain and Ireland is not clear." It continues in an expanded article: "In the territory of ancient Gaul, now occupied by France, about 60 stone inscriptions in the language known as Gaulish were found. The date from the 3rd century BC to the 3rd century AD. For the older inscriptions, the Greek alphabet was used, for the more recent, the Roman characters of the Imperial period."

The erroneous assumption that the Slavenetic inscriptions fall within the Celtic ambit have caused nothing but frustration for four generations for Celtic linguists. As recently as 1980, the famous Celtic scholar, Léon Fleuriot, devoted much of the year to the decryption and translation what is known as the Lezoux-Plate inscription without the finest scintilla of success. Parts of the plate having broken off and vanished, we only have a portion of the inscription. But, I hope I do not exaggerate when I say that, of what remains, the average Slovene would be able to make substantial sense of the import of the passage without too much difficulty. What appears on the back of the plate are the do´s and don´ts addressed to the family´s young son. Readily recognizable are such phrases as: "JES TI AN KON´ (you eat a horse), "GOR JO SED" (sit up), "SAMO BIJ MOLATUS" (only say your prayers), "PAPEJ BOVDI, NE TE TU (TAM) (eat here, not there, here (and yonder)), "NUGNATE NE DAMA GUSSOV" (we do not give you kisses), "VE ROV NE CURRI" (do not leak into the ditch), "SIT BIO, BER TO" (when you are full, read this).

Of some seventy-five-odd inscriptions heretofore called Gaulish, only about a dozen appear to be Celtic. Prominent among them is the purportedly Druid Calendar of Coligny (Text Inscription 53 of Dottin´s La Langue Gundoise). Of the remainder, 65 are unquestionably Slavenetic. Of these, 44 have been translated in my books Adieu to Brittany and Journey Back to the Garumna. I will now review the rest. An explanatory parsing appears in Appendix B.

Fellow, The Jerusalem Center for Biblical Studies and Research

After submission of my review of VENETI to Sir Rodney Hartwell in June 1998, I came across a book in Athens of potential interest to the subject of Proto - (West) Slavic presence in the Balkans He Glossa tes Makedonias, he Archaia Makedonike kai he Pseudonyme Glossa ton Skopion, "The Language of Macedonia, Old Macedonian and the so-called Language of the Skopljites" (written in modern Greek with citations in classical Greek and in Latin), by G. Khatsidakis, et al. (Athens, Greece: Olkos, 1993).

I will not review the book at this time for our Greek-reading Augustans, other than to indicate broadly my impression that the seven contributing writers have built a well-reasoned argument for the essential Hellenism of Alexander the Great. One cannot, however, avoid suspicion of a hidden political agenda to head off any future South Slavic irredentism for the Macedonian-speaking hinterland of Thessalonica. Unlike Veneti the book presents no linguistic evidence to shore up its premises and conclusions.

". . . the names of their gods, the myths and the mythical heroes, their personal names, the monumental and place names and local items of their dialect ... are all essentially Greek." [my translation] Yet I would query whether this might not be reflective of an on-going, pervasive Greek cultural influence in the frontier zone between Greece and the Balkan peoples reaching back to the pre-heroic age.

The passage that caught my eye and that I would bring to the attention of our fellow Augustan, Dr. Jozko Šavli, and his co-authors of Veneti, Prof. Matej Bor and Father Ivan Tomazic, occurs in Anna Panagiotou´s study (pp. 187-188), "He Glossa ton Archaion Epigraphon tes Makedonias," "´The Language of the Ancient Inscriptions of Macedonia." I urge Dr. Savli and his colleagues to reexamine the known Macedonian inscriptions -- there are some 6,000 of them - through the prism of Slovenian diachronic dialectology, and I first pose the challenging question here in The Augustan: Though thoroughly assimilated into the Greek culture and language through the education of his teacher, Aristotle, can it be that Alexander the Great himself emerged into world history from a Proto-(West) Slavic, i.e., Venetic, family background?

... which narrates another event of the kingdom of Alexander... considered as an indication that the Macedonian language was not a Greek dialect, but a different language: the general Philotas was accused by one of his compatriots of not feeling ashamed,

". . . born a Macedonian, to hear the men of his language through an interpreter,"

i.e., according to this passage, Philotas had need of translators in order to understand the mother tongue.

Yet in a curious way, this passage comes to contradict another by the same author in the same document (VI.9.34-36.) Alexander asks if Philotas will speak in the language of their fathers,

"... Macedones ... de te indicaturi sunt, quero an patrio sermone sis apud eos usurus," "... the Macedonians who will judge you, I ask if you will use the language of [our] fathers with them,"

and elicited the response:

"[Above and] beyond the Macedonians ... there are many present whom, I feel, will more easily grasp the things I say if I use the same language you did, for no other reason, I believe, than that your speech might be understood by many."

This explanation caused the angry remarks of Alexander that Philotas neglects to speak in the language of their fathers:

"Have you ever seen Philotas reject the language of [our] fathers heretofore? Indeed, he alone is averse to learning it. Let him then say, however, it is in his heart, since you will remember that he is opposed to our custom as well as our language."

Ms. Panagiotou´s article proceeds to attempt to explain this passage as referring to a northern Hellenic dialect so greatly at variance with the contemporary Koine that it might just as well have been a foreign language. Her attempt falls short of convincing.

Now, the work plan before us is not complex. The Macedonian inscriptions, must be scrutinized anew by the trained and sensitive eyes of Slavicists of the stature of the authors of Veneti. Let this task be undertaken at the earliest possible moment.

Rolfe states (p. xviii): "Curtius´s principal source is Clitarchus, son of Dinon (Pliny, NH. x (49) 136), who accompanied Alexander´s expedition and wrote a highly coloured account of it ... Curtius used Clitarchus in a changed and contaminated form, perhaps through Timagenes, whom he mentions in viii. 5.21 in connexion with Clitarchus and Ptolemy ... He differs with Clitarchus in ix. 5.21 and follows Ptolemy, censuring Clitarchus for carelessness or credulity. . ."

Rolfe adds (p. 3od): "The Historiae seem to be the work of a rhetorician rather than of an historian. One of his principle aims was to insert in his work brilliant speeches and romantic incidents. Doubtless he wished to give a correct account, but his imperfect knowledge of history and geography led him into many errors.

Rolfe is correct in pointing out (p. xxiv) that the chancellery language of Macedonia was Greek: "For some generations the court language was Attic Greek." Yet, even conservatively admitting constraints on Curtius´ accuracy, we must presume a kernel veracity for the passages in question. That presumption is sufficient to warrant reexamination of the Macedonian inscriptions by Venetologists.